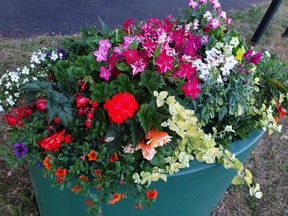 Some may equate a cannabis high to a religious experience, but any such feeling likely crashed back to earth after a U.K. parish council learned a green-guided gardener paid homage to weed as part of a communal floral display by a church.

Members of the West Parley Parish Council were left in a spot of bother after posting a snap of the plants, one media outlet notes there were six in all, inside a two-metre-long roadside planter not far from a church and posting the “floral” display on social media, per The Daily Mail.

Along with quick mentions of a new defibrillator being installed at the village’s sports club building and improved security at local playing fields, a July 19 post by the council notes there was plenty going on, including new floral displays.

“The displays around the village are looking lovely and thanks go to the team of volunteers who tend and water them, especially in this hot spell,” with parts of the U.K. reaching a record-breaking temperature of 40 C. “We hope you enjoy the splashes of colour around the village.”

The pot plant display certainly made a splash, although likely not how the council intended. Members took action to remove the cannabis — recreational use and cultivation of which remains illegal in the U.K. — from the planter in question.

Although the plants were removed from the planter, the social media post trumpeting the splashy display took a bit of extra time to reflect that fact. As it stands, the council website offers snaps of the two colourful flower beds that have a little less green in favour of a clean and legal look.

One person driving by with her daughter in the vehicle reported it was tough to miss the pot plants, pointing out that some of them towered over the bedding plants, The Daily Mail reports.

“As I looked over, I thought, ‘Oh my God, is that what I think it is?’” the committed gardener said after spying the planter, per the publication.

“I can identify most plants, so my head did a 360 when I spotted them in the council planter,” BBC reports. On closer inspection, she determined that, yes, indeed, the plants were cannabis, prompting her to report the find to council.

“I just found it hilarious. The council were looking after these planters every day,” the passerby said, according to Metro. “The council did a great job with them and I’m sure this was just someone’s idea of a joke,” the gardener said.

A council spokesperson made clear the pot plants were “not part of this year’s schedule,” with the plants being removed on July 20 and all other planters checked to ensure there were no other unsanctioned additions.

The removed plants were to be passed on to the Dorset Police for identification and destruction, Dorset Live reports.

While recreational cannabis is illegal in the U.K., even in a legal country like Canada, provincial or territorial jurisdictions that allow cultivation for personal use require that the plants not be grown in a space visible to the public.

It’s certainly not the first time that worship and weed have crossed paths.

Illegal grow-ops have also been found in a former Sikh temple in England and a historic synagogue in Argentina shuttered during early COVID-19.

But it’s not solely places of worship that have had to excommunicate illegal pot plants.

Mysterious cannabis plants taking root in Thailand’s Parliament complex were recently uprooted and disposed of, according to Inquirer Net. It was estimated that approximately 100 saplings were found while gardeners were recently inspecting a banyan tree knocked over in a storm late last week.

It became legal in early June for Thais to grow at home cannabis, which was decriminalized in 2018, for medical use. Recreational weed remains off-limits.

Government houses — from the municipal to national level — have also housed pot protest plants in Ireland, the U.S. and New Zealand.

Subscribe to Weekend Dispensary, a weekly newsletter from The GrowthOp.

Sign-up for Weekend Dispensary to get the latest cannabis news and exclusive articles delivered straight to your inbox.

The next issue of Weekend Dispensary will soon be in your inbox.