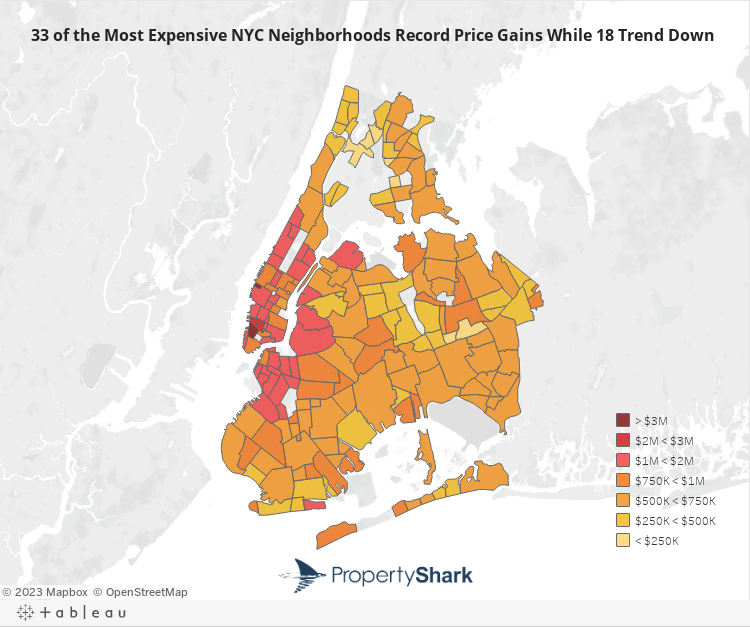 Across the U.S., concerns of a recession are increasing, and the general public is feeling the quick rise of the cost of living. That, coupled with the further raising of the Fed’s benchmark rate has influenced a growing number of would-be homebuyers to pull out of the market or at least step closer to the sidelines, waiting to see if real estate prices will drop as a result of diminished demand and economic volatility.

Meanwhile, in New York City, sales activity had yet to show any signs of a slowdown in the second quarter. In fact, Q2 sales came in 11% over Q2 2021 figures. However, the third quarter closed with a 4% year-over-year (Y-o-Y) downtick in the number of sales. More precisely, there were 9,878 sales in Q3 2022, whereas Q3 2021 closed with 10,268 transactions, as the market readjusts after the homebuying frenzy of 2020 and 2021 artificially lifted prices.

Quarter-over-quarter, sales numbers were actually up by 636 transactions, reflecting the seasonality evident in 2021 as well, when Q3 sales surpassed the number of deals closed in Q2. For now, Q3 figures have not shown any drastic changes in NYC trends, with more visible market shifts likely to show up in Q4 figures.

At the borough level, only Queens underwent a price contraction. Its median slipped 4% to $559,000, while Manhattan and Brooklyn experienced a cooling in sales activity, coming in 8% and 5% below year-ago levels, respectively. Notably, the Bronx was the only borough where both sales activity and the median sale price were on the rise, growing by 8% and 7% Y-o-Y, respectively. That said, the Bronx has yet to place any neighborhood among the city’s 50 most expensive.

At the other end of the spectrum, 18 of the priciest NYC neighborhoods logged declines in their median sale prices, 11 of which were in double-digit territory. Even so, the sharpest price drop, by far, was Fiske Terrace’s 45% Y-o-Y depreciation.

Explore the interactive map below for at-a-glance price and sales insights for NYC neighborhoods in Q3 2022:

With a median sale price of $1.14 million and a 4% Y-o-Y increase in the borough’s median, Manhattan remained the priciest of the four boroughs analyzed (as expected). And as is usually the case, Manhattan also claimed most of the city’s 10 most expensive neighborhoods (six), including the five priciest. Still, Brooklyn came in strong, earning four positions.

At the top of the list, Hudson Yards and TriBeCa maintained their places as the most expensive neighborhoods, with both remaining in the $3 million and above price range. However, Hudson Square overtook SoHo to become the third-most expensive NYC neighborhood, while SoHo slid to #4.

In strong fashion, Hudson Yards remained the #1 most expensive NYC neighborhood. Its median sale price rose 34% Y-o-Y — the fourth-sharpest increase among the city’s leading neighborhoods — to reach $5,852,000. Hudson Yards’ median increase was influenced by a 40% increase in the average size of condos sold in the neighborhood, which went from a 1,920-square-foot average in Q3 2021 to 2,693 square feet in Q3 2022.

Additionally, most sales in Q3 were recorded at 35 Hudson Yards, whereas 15 Hudson Yards claimed the most deals in Q3 2021. At the same time, sales activity accelerated by 33% in the neighborhood, although it must be noted that this was the result of an increase from nine sales in Q3 2021 to 12 total in Q3 2022.

Not to be outdone, TriBeCa remained the #2 priciest NYC neighborhood — despite a mere 5% Y-o-Y increase in its median sale price that lifted it to $3,515,000. However, sales here remained virtually unchanged, with TriBeCa closing 100 sales during Q3 of this year, which was just one more than in Q3 2021.

Meanwhile, coming in at #7 with a median of $1,791,000, Brooklyn’s Gowanus underwent a 65% Y-o-Y price increase to claim the sharpest price growth rate among the city’s top neighborhoods. Cobble Hill claimed the fifth-largest increase. Its median rose 29% year-over-year to reach $1,755,000 and become the #9 most expensive NYC neighborhood in Q3.

Notably, Manhattan’s Little Italy and Battery Park City were absent from the city’s 10 priciest neighborhoods due to sharp drops in their medians: Little Italy fell from #4 last year to #11 this year. Its median sale price contracted 41% Y-o-Y after Q3 2021 figures were lifted by half of that quarter’s sales closing at 185 Grant St. with a $1,445,000 median. Similarly, Battery Park City slipped from #8 to #19 following a 26% Y-o-Y median sale price decrease, which was influenced by a 23% decrease in the average size of condo units sold there.

Even so, sales surged 116% in Battery Park City, marking the second-fastest acceleration in transactional activity among the city’s leading neighborhoods. At the same time, Battery Park City and Little Italy had the third- and second-sharpest median sale price contractions, respectively, among the city’s richest neighborhoods. Chinatown had the fourth sharpest after its median decreased 24% year-over-year.

While Manhattan’s median sale price climbed 4% Y-o-Y, Brooklyn’s median ticked up just 1% Y-o-Y, going from $810,000 to $815,000. Yet, despite the borough’s stalling price trends, it still managed to claim four of the city’s priciest neighborhoods. Here, Carroll Gardens took the lead at #6 with a $1.81 million median following a 13% Y-o-Y price increase.

Gowanus was next for Brooklyn, landing at #7 with a $1,791,000 median following the most significant rate of price growth among the city’s top 50 neighborhoods. It was followed by DUMBO at #8 with a median of $1,775,000 after a 2% price contraction that moved it two positions lower compared to Q3 2021.

Conversely, Cobble Hill rose from #13 last year to land at #9 in Q3 2022, thanks to a 29% increase in its year-over-year median sale price. Not only did that increase raise its median to $1,755,000, but it was also the fifth-sharpest price appreciation among the city’s leading neighborhoods. This was partly due to a change in the mix of asset types that were sold, with co-ops making up 25% of the neighborhood’s deals, as opposed to 34% during the same timeframe in 2021.

Brooklyn also claimed the sharpest price contraction with Fiske Terrace, which saw its median drop by 45% to stabilize at $905,000. That’s a far cry from the $1.65 million median it posted last year, which placed it as the #9-priciest area in NYC. Here again, the pricing decrease that took Fiske Terrace all the way down to #45 was influenced by a change in the mix of properties sold: While 80% of deals in Q3 of last year were homes, that ratio dropped to 37% in Q3 of this year.

At the other end of the spectrum, Brooklyn was also home to three of the five neighborhoods where transactional activity declined the most: First, Bergen Beach closed 62% fewer sales compared to Q3 2021 to mark the second-largest decrease in sales, right behind Hudson Square. Specifically, Bergen Beach closed just five deals at a $945,000 median.

Represented by seven neighborhoods among the city’s 50 most expensive, Queens’ median sale price contracted 4% Y-o-Y to stabilize at $559,000, while sales ticked up 2%. As is often the case, the richest neighborhoods from Queens placed in the bottom half of our ranking.

Specifically, Ditmars-Steinway was the borough’s priciest location at $1,129,000 with an 18% Y-o-Y price increase. However, sales activity fell by 33% here, making it one of three Queens neighborhoods among the city’s priciest that closed fewer sales in Q3 of this year than it did in Q3 last year. Similarly, sales were more than halved in Hunters Point, with 55% fewer deals closed here. Its median also ticked down 1% to $1,055,000.

Queens’ remaining neighborhoods in our ranking posted medians below $1 million, with Belle Harbor just $1,000 shy of that benchmark. And although Queens’ #3 most expensive neighborhood underwent a 13% Y-o-Y price contraction, sales surged 120% for the sharpest acceleration of sales among the 50 richest neighborhoods in NYC.

For more information, explore New York City’s 50 most expensive neighborhoods in Q3 2022 in the interactive table below:

NYC coworking and office also leads in terms of office market share, with 4.6% of Brooklyn and 3.1% of Manhattan office space designated as coworking. Miami coworking makes up 3% of the local office market and Nashville coworking takes up 2.4% of the city’s office space. Although NYC might have the most flex space in the Northeast, coworking in Philadelphia has had a presence since the early aughts, while Boston coworking benefits from its rich life sciences sector.